23 years of building this

Let me start by saying I haven’t posted on the site in 14 years that’s when I sold my Ascent-i Logans. I’ve been building this system since 1998 and it’s come a long way! This is for 2 channel music listening only. After I sold the Ascents I had a pair of Linkwitz Orions, sold those and then went to a pair of Earl Geddes Abbey 12A speakers and I still own those and may never sell them. I learned a lot about subwoofers and integrating subs into a system from Earl (Earl lives 20 minutes from me) Duke LeJume also uses this sub theory and people know it as swarm. Well as good as the other speakers sounded especially the Abbeys I still longed for that sound I had with the Ascents, the reason I sold the Ascents was that I just couldn’t get the bass to integrate with those speakers to my liking. Now 14 years later I own a pair of Classic ESL9 speakers and am very impressed, and yes I have the bass integrated beautifully with these wonderful Logans. Here’s the system.
Amps- Bi amped
Rogue Audio Stereo 100 on the panels
Parasound A21+ on the low end
2 Behringer EP4000 powering 2 subs
Pre amps line stage and phono
Line stage Backert Labs Rhumba 1.2
Phono Allnic 1201
Turntable/Cartridge
Rega RP8/Apheta2
Reckhorn B-1 subsonic filter
Subs (3)
1) 18” 18" Maelsrom X driver in a 8 cu/ft sealed enclosure powered with 2400 watts
2) 15" Dayton Titanic Mark III driver in a 6.75 cu/ft sealed enclosure powered with 950 watts
3) Svs 12” powered sub (300 watt)
Behringer DCX2496 speaker management controller for the subs
Disc player- Oppo BDP83 SE Modwright tube mod
Streamer- Bluesound Node 2i
Speaker and interconnect cables Morrow Audio level4
Power cords Silnote Poseidon GL
Racks Pangea Vulcan 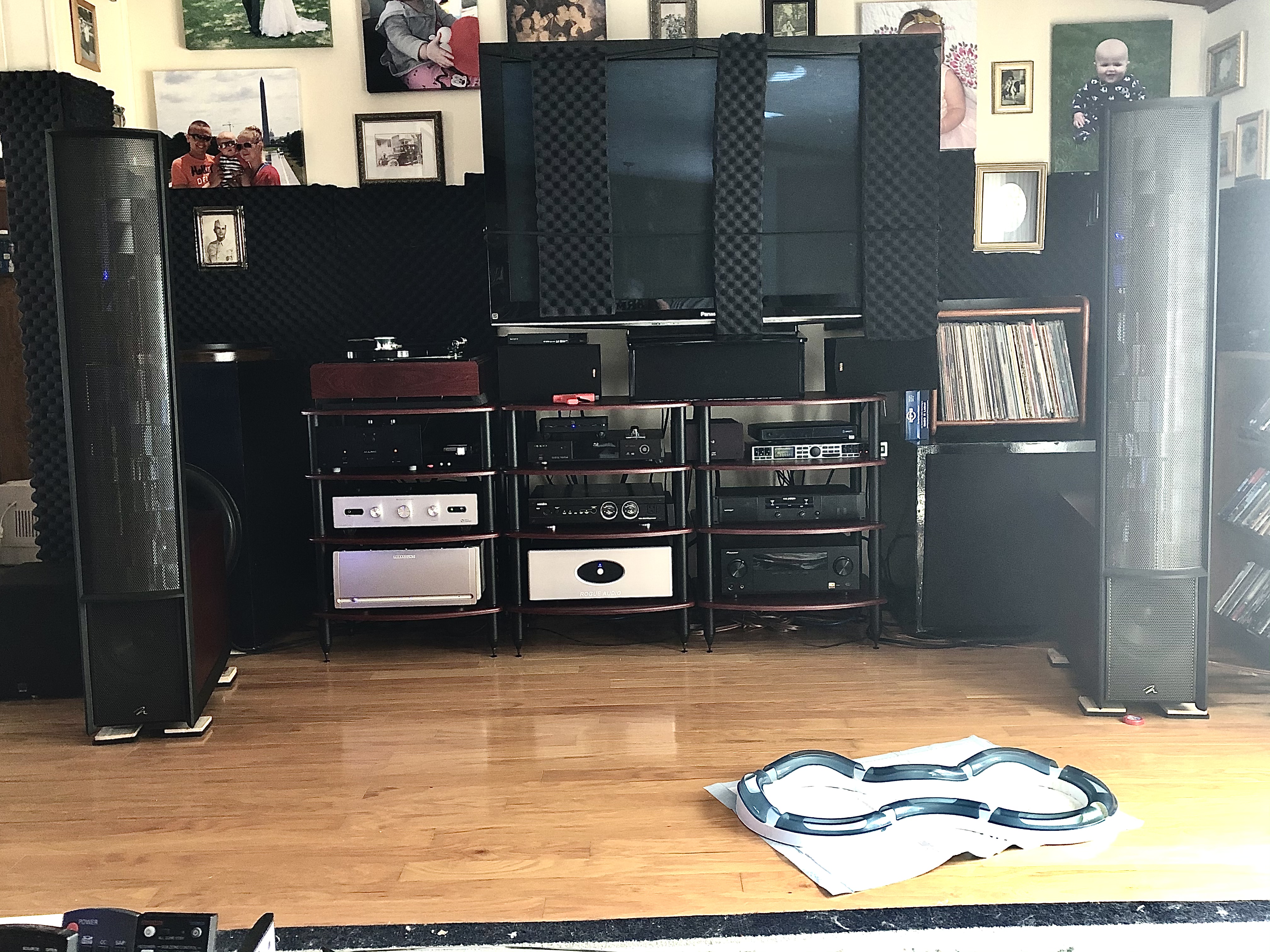 Welcome back to the fold Dan !!

one question, if it's two channel only what's with the TV ?

Yeah I probably should have explained that. There is also a 7.1 surround system in the racks, separate from the 2 channel equipment. Pioneer atmos receiver, Behringer amp for the subs, Klipsch fronts, rears, Polk sides, Def Tech center. The subs are 15” with 18” passive radiators tuned to 17hZ. I have no room for two separate systems in different rooms

Welcome back. Beautiful set up.
How do you like the Backert preamp? I was talking to Mr Tebbe about trying one out but lost touch.
Enjoy!
S

Wow! Nice setup. How do watch TV like that? Seems like your only seeing half the screen?

Lightloopy said:
Welcome back. Beautiful set up.
How do you like the Backert preamp? I was talking to Mr Tebbe about trying one out but lost touch.
Enjoy!
[/QUOTE

Lightloopy said:
Welcome back. Beautiful set up.
How do you like the Backert preamp? I was talking to Mr Tebbe about trying one out but lost touch.
Enjoy!
Click to expand...

I love the Backert preamp, I have been very impressed with his work and products for some years now. I had him work his magic on a Conrad Johnson PV-12 preamp a while back and his mods on that unit were amazing that preamp played well above it’s level. The Rhumba I have is a 1.2 technically but Bob made me a great deal he upgraded it with all the changes that went into the Rhumba 1.3 for a price I couldn't refuse. This unit sounds great, I’ve played around with different tubes and settled in on NOS RCA 12AU7 clear tops, a nice surprise since these are very abundant and not expensive at all, they just WORK with this preamp. I’ve had JJs and Northern Electrica in there too and the Northern Electrics sounded pretty good but nowhere near as good as the clear tops. Backert labs is a great company to deal with his tech advisor and music guru is a great guy to deal with and that’s who you get on the phone to discuss things with, he will give you an honest opinion on what tubes “he” thinks play well with their designs and it’s always a good thing to talk to a music guy on that subject.
Click to expand...

spkrdctr said:
Wow! Nice setup. How do watch TV like that? Seems like your only seeing half the screen?

Hahahahhaahha yeah I played around with a lot of acoustic foam configurations to tame the reflections off the screen, I had the screen completely covered and that dulled it out way too much. I finally settled in on the three strips and then put the new racks in and moved the tv to the right of center so I had to get the foam off set right too. I played with the foam on the walls behind and to the sides of the speakers too but the overall presentation sounds the best without the foam on the walls.

Appreciate your thoughts on the Backert. I use a Premier 16 II now and not sure if it would be worth refurbishing once it starts breaking down. I guess I could check with CJ but imagine it's pricey. I will definitely check out the Backert. Thanks
You must log in or register to reply here.