So I got my SL3's all apart, and the rubber strips behind the panels were hard and distorted, and the adhesive was all gummy.
Same goes for the foam rubber behind the woofer grill. So I pulled off all the rubber strips. The residue left behind was sticky/gummy and I didn't know what to use to remove it. Then I tried the Booger Technique. Yeah that's it.... just start rubbing it with your finger, and it eventually coagulates into little boogery balls that you can roll up. It really worked well. After doing both speakers, my fingers were a bit sore from rubbing on the wood, but I got the residue all cleaned up.
I replaced the foam with 3/4" wide, 5/16" thick weatherstrip from Home Depot. On the woofer panel, I also added a 1/8" thick strip on the edge of the grill. Oh yeah... to clean the original gummy residue off the metal grille, I used bug & tar remover.

And here they are back in action, restored to glory! The first half hour of play was really rough..... but now after 4 hours of playing, the magic is back. They already sound really great. I expect the lower mids should fill out as they break in, but the weakest link of the SL3's for me has always been around the crossover point... 300-400 Hz. The speakers you see hiding in the corners are 15" Tannoys, and they excel at connecting in the chesty mid bass region. The two speakers are very very different in presentation, yet both satisfying in different ways. I'm very happy to keep both! 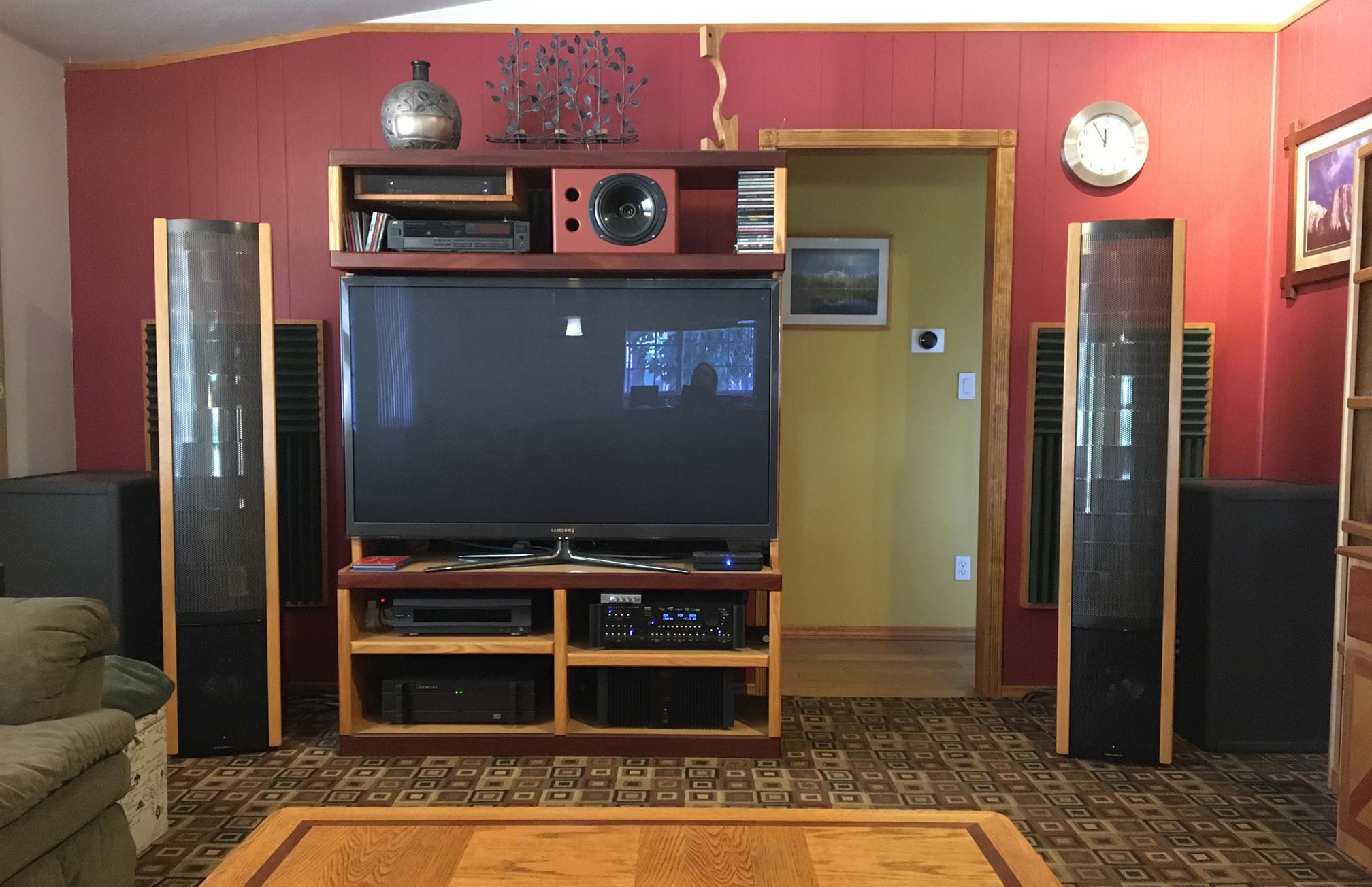 Congratulations! Well done. I was at my friends' place this week listening to my old SL3's I sold to him. Phenomenal speaker. Hang on to them! Listening to the CLS II's with fresh panels now and they are sweet. Vintage ML rocks.
M

So next I will turn my attention to the crossover.

I'm really confused by what M-L did here.... the main panel LF rolloff is done by 30uF of capacitance, made up of a 15uF electrolytic + 15uF film cap.
That's strange to have split it up 50/50 between the 2 types. I mean really, how much money were they saving by not just using two 15uF film caps?
It's also weird that they clearly had 30uF caps in their stock.... there's one sitting right THERE on the left! But that one's not performing the rolloff.
Maybe they tried it, and it just didn't sound as good as the 15uF?? Weird.

I believe the 30uF cap on the left is part of a notch filter (along with the inductor & resistors) so I'm not going to put $$ into replacing that one.
But I will replace the 15+15 pair, and also the 330uF on the woofer. It is, after all, a 25yr old electrolytic.
If anyone has experience or recommendations about this, please comment! 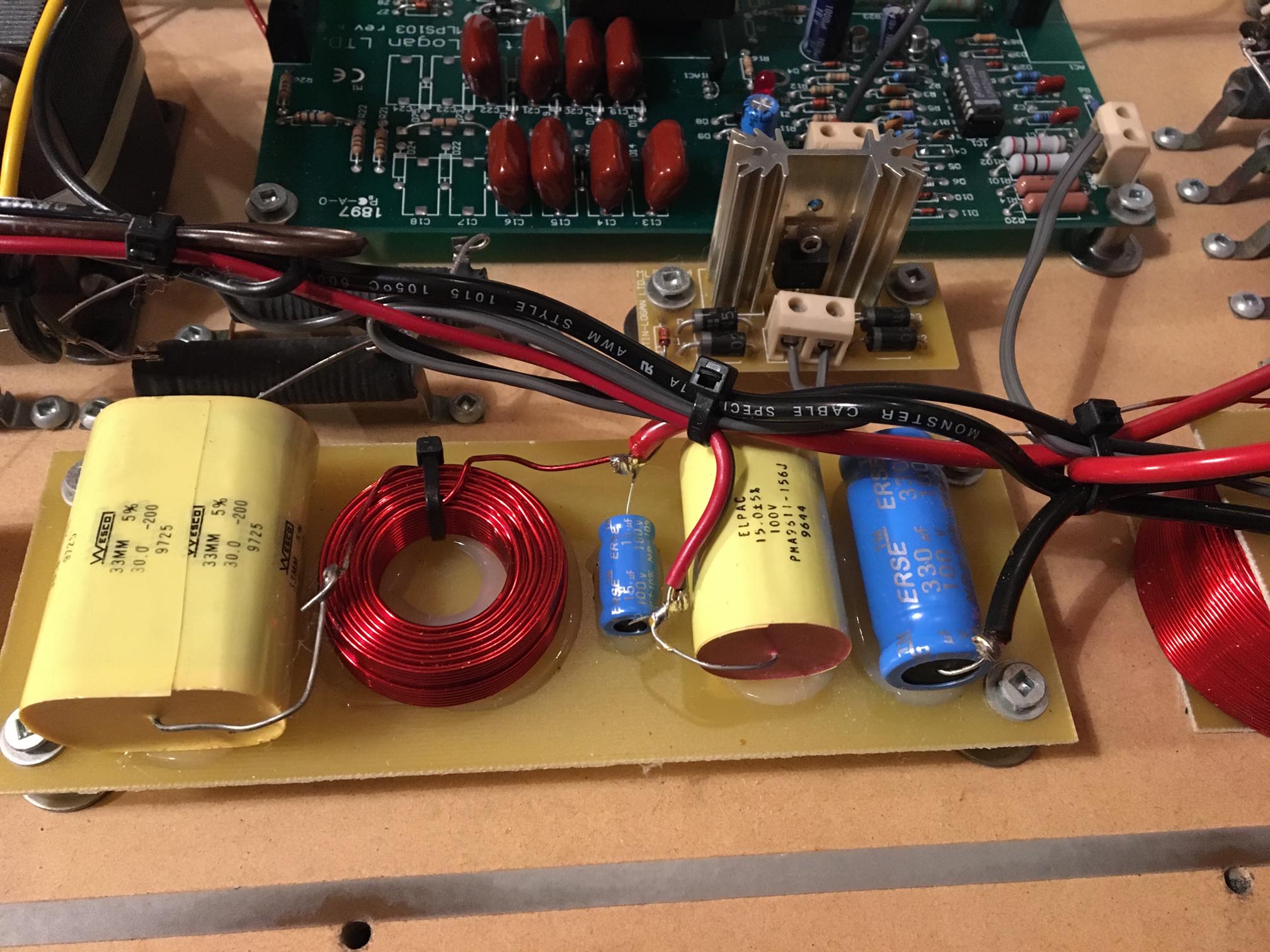 First, thanks for documenting the panel replacement process and for the tips.

I'd add one more: the small foam pad just above the connector block should also be refreshed with a multi-layer absorbent element, or simply, some fresh foam.


Mirolab said:
So next I will turn my attention to the crossover.
Click to expand...

Ah, this is an area that will indeed yield benefits.
You seem technical enough that I'll recommend a fully active crossover mod. I document the necessary steps in the SL3XC build story, link in my sig.
These days a nice DriveRack Venu360 or similar speaker processor will do the trick.
Using LR 24 crossovers set to around 340Hz results in excellent balance.


Mirolab said:
Tannoys, and they excel at connecting in the chesty mid bass region
Click to expand...

Nice speakers, and yes, they have awesome 'slam'.

But you can have that AND the magic of ESL if you deploy some MidBass Modules. I was marveling at the impact they have when watching a movie yesterday.
A Venu360 will have enough outputs and configurability to run an MBM or two.
M

I thought a lot about going active on the woofer, but realized that I can't go digital on just the woofer, because of the latency. I'd have to go full active crossover, and I'm not willing to complicate my system in that way, right now. I have 3 different pairs of full-range speakers that I like to rotate through in my living room, about every 6 months, and I'm not willing to commit to the SL3's 100%. For now I'm very happy just having the SL3's back to 'new' condition.

Also... beside the cap upgrades, I'd consider upgrading the woofer, maybe to the Scanspeak Discovery 26W/4534G. But, I don't see the 8 ohm version available anywhere, only a 4 ohm version.
A

Mirolab said:
Also... beside the cap upgrades, I'd consider upgrading the woofer, maybe to the Scanspeak Discovery 26W/4534G. But, I don't see the 8 ohm version available anywhere, only a 4 ohm version.
Click to expand...

It is listed on the website you posted a link to.

You need the 4 ohm version woofer if you're keeping the passive xo.
Attached is a progression of SL3 back panels with crossovers. Yours strangely is early, falling after the first version, but earlier than the middle one, but uses the latest Vifa woofer.

I used to have a final year (2000) SL3 and now Ascenti and am only using an analog active xo on only the bass (leaving the ESL portion unaffected), and that's enough to fix the worst bottleneck of any of these early ESL hybrids: the series inductor. Once active and the woofer is connected directly to the amp, the bass is clean, impactful, and tuneful. All you need besides the active xo is an extra amp for the bass, so not that complicated. 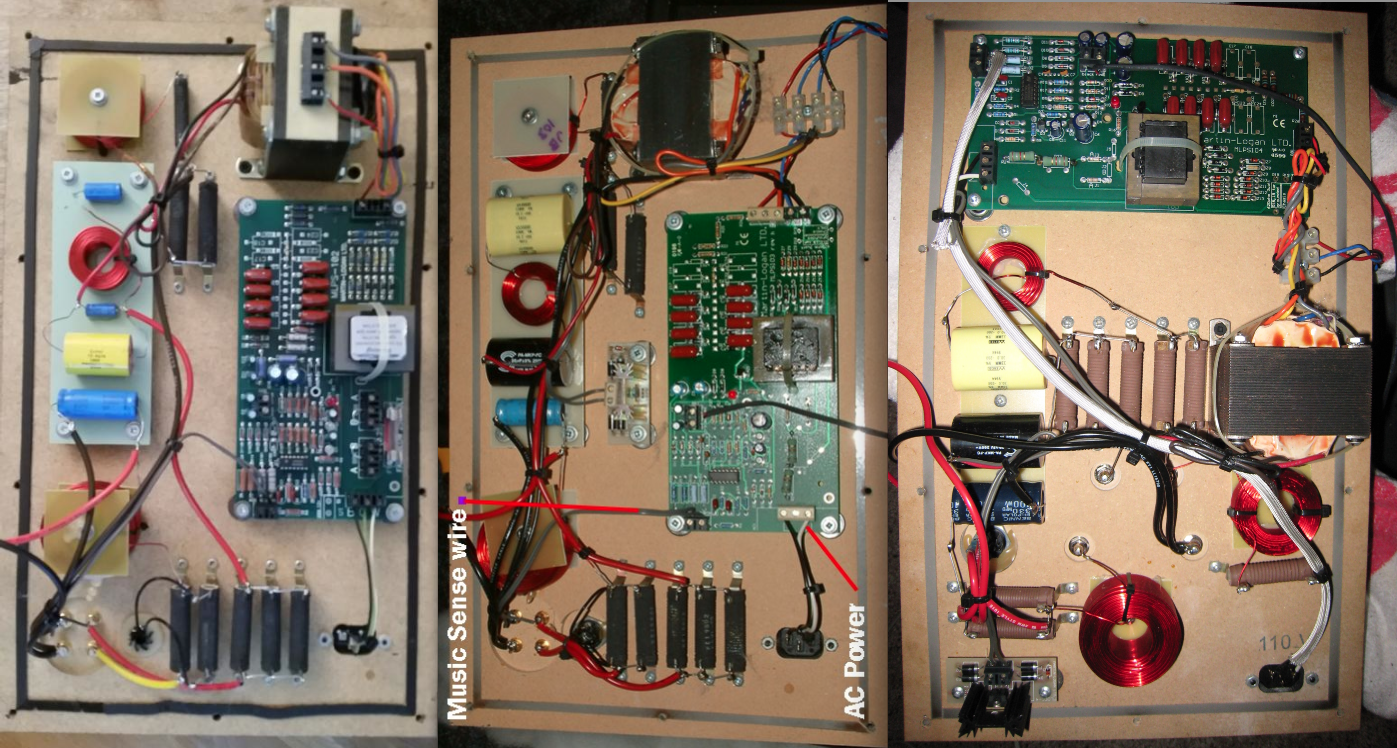 Tosh, Thanks for the good info!
I did have it in my head for some reason that it was an 8 ohm system, but it's in fact rated by M-L as 4 ohms.

My back panel layout looks mostly like the middle board on your picture, except mine
still has the crappy 15+15 uF cap pair rather than the single Solen cap that they switched to later.
I've purchased Jantzen Z-caps to replace them... but haven't installed them yet.

I like your idea of analog crossover and dedicated woofer amp.... and it's easily un-doable to restore the speaker to full passive.
What active crossover are you using?