I have glanced through all 10 pages of CLS II threads but can't seem to find what I'm looking for, so I hope it's okay to start a new thread here. My question is, for CLS II, without music playing, how long will the panel stay energized before it goes to sleep? I counted 20 seconds -- by looking at the LED light. Is 20 seconds normal? I ask because it's not indicated on the owner's manual. I wanted to gather some feedback first before I remove the circuit board to do some troubleshooting. Martin Logan service dept. was kind enough to provide me the schematic diagram. I have attached here a few pictures as well as the power supply schematic diagram.

Hola fcel,
That’s normal. The LED goes off, but be careful. The panels remain charged for several hours. If you want to discharge the panels, play music having them unplugged from the mains AC. When they stop singing, they are fully discharged. If you plug them back, it takes less than a second to have them charged back again.
Happy listening!
F

The other day while I was playing some heavy bass music, I noticed that even though I hear the bass coming out of the subwoofer but I didn't hear any sound coming out from CLS II until a split second later, which prompted me to think that there might have a problem with the CLS II. After reading the owner's manual, I learn about the sleep mode, thus my post earlier; for whatever reason, even though I have the CLS II for a number of years now, I never noticed the split second delay until recently, which raises another question as described below.

I know the panel requires high voltage but it operates at very low current, so when the panel wakes up, does the voltage ramp up instantaneously to full operating voltage or does it ramp up slowly, say over a few seconds? If it ramp up slowly, it would definitely affect the enjoyment of music listening.

In the case of home theatre, if the subwoofer is placed in standby mode, the subwoofer doesn't come alive instantaneously the moment it calls for it, consequently one would miss that initial impact of the bass, and thus spoils the fun of it, which is why I always placed my subwoofer in always-on mode.

In the case of CLS II, I was thinking, shouldn't the electronic timer be set so that it doesn't go to sleep, say for at least 1-2 hours? That way, if we wanted to change LP or CD within the first 1-2 hours, we can feel comfortable that we won't miss anything, albeit only for a split second. There is a way around it, which is, I would hit play on the CD player to get the panel energized, then I'll hit stop immediately, and then I'll hit play again within the 20 seconds period to really start listening.
Last edited: Oct 1, 2020

Hola fiel,
To charge the panels takes less than one second. And it remains charged. But if you have a suspicious problem, disconnect the woofer while you do some tests. Also, this will help you to get the most of your CLSIIz.

Playing any music with bass, move your CLS back and forth. You are going to tune them to your room. Starting with one meter or three feet away from the back wall. Move them forward 5 inches only and have a listen...write down your sense of bass, the now move them back 10 inches and have a listen. There is a position where the CLS start to sound with good bass. It takes a while, but really worth the time spent doing it. Use the flash light technique to have one third of the panel facing you. On the CLS, there are two big bass section at both sides of the stat panel. The one third is where the curved with the black spars are. Here is a video.
So, first do the tuned for the best bass room response, then later add the sub. Remember, the woofer should be perceived, not hear it. Too much bass energy spoils the stage and image of your CLS. Yes I know, they are bass shy. Leave the CLS full range, and cut your woofer at 40Hz and bellow. Remember that cutting it at 40Hz, your woofer still is producing sound at 80Hz.

While doing this, you have a faulty power supply, then you should inspect why you have that. Swap the power supplies, they are the same and listen if the problem is coming from the suspicious one.

Thanks Roberto for the tips on setting up the speakers. I believe I have my speakers all dial in already but it's always interesting to start from fresh again. By the way, for subwoofer, I'm using one REL S/5, with crossover frequency set at 28Hz and volume set at 1/3 from max., with CLS II operating at full range.

In regards to whether there is any issue with CLS II's power supply, I've checked the other speaker and found that it also takes only 20 seconds to go to sleep mode, which I'll conclude that both speaker's power supply are fine.

Fcel,
What a wonderful speakers are the CLS, right?...for combo music are incredible. Voices are presented with such realism that you don't believe what you are hearing! I had all the CLSs models, my first was on 1987, in July. I was attending at Chicago Summer Consumers Electronic Show, and Museatex Audio was showing their preamp and power amp products with a pair of CLS. Cupid arrowed my heart immediately.

You are just fine with your adjustments and settings. All I can say is trust your ears, they are the final judges!

The speaker's high voltage bias circuit uses a voltage multiplier circuit. It converts AC to DC through a series of diodes and capacitors, where each cycle of AC adds the capacitors charge voltage of the multiplier circuit to the previous stage. If you open the electronics boxes, you will see a series of orange caps. Those are the ones in the multiplier circuit. They take several cycles of the 60Hz AC to get fully up to running voltage, but 1-2 seconds is 60-120 cycles, and that should be plenty. The orange caps hold the high voltage bias charge even after the charging circuit stops working, so the speaker will keep playing normally, long after the LED indicator has gone out. You can easily verify this for your self by unplugging the AC power to the speakers while playing music. The speakers will normally continue to play just fine for 10+ minutes after being unplugged.
More info on voltage multipliers: Voltage multiplier - Wikipedia
Image of my very early CLS's circuit board: 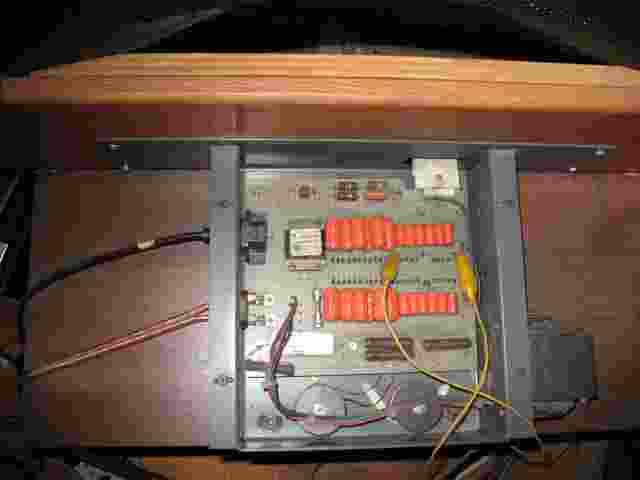 After disconnecting power, it does continue to play for well over 10 minutes, although the sound level drops considerably after about 5 minutes. Schematic diagram indicates (12) very small value capacitors but at very high voltage. I'm quite surprised that 0.1microfarad capacitors can hold that much charge.
You must log in or register to reply here.
Share:
Facebook Twitter Reddit Pinterest Tumblr WhatsApp Email Link