Looking to expand my existing 5.1 setup to a 5.1.4 and I'm looking for some opinions on which smaller, budget friendly-ish speakers to add. My existing setup that was spec'd out by the guys at Magnolia/Best Buy around 5 years ago is a Motion 30 center channel, Dynamo 700 sub, ML-67i in-ceiling front surrounds, and ML-62i in-ceiling rear surrounds. My plan is to keep all of those since I've been pretty happy with it so far and just reassign the in-ceiling speakers to be Atmos height speakers and then add some new ear level speakers for the surrounds. See below for the living room layout...

My local Best Buy is getting ready to do a remodel in their Magnolia shop and has a bunch of Martin Logan floor models marked way down and I was able to pick up a pair of Motion 2i's for $170 that I was going to use for the rears but I'm debating if I should go back and get the 4i's instead? For the fronts I'm leaning towards the Motion SLM or SLM-XL since they're all 20% off right now and to avoid running wires through the walls again (just mounted on the wall next to the TV to hide the wires behind it) but I'm wondering how well they'll match up sonically with 2i's or 4i's in the back? Or would it be better to just grab the 4i's to use in the front and keep the 2i's for the rears instead? Only problem with that route is they would stick out a little too far off the wall for my taste so they would likely have to be laid down on their side along the top back corners of the TV stand/cabinet and I'm not sure how that would potentially affect the sound quality if at all? 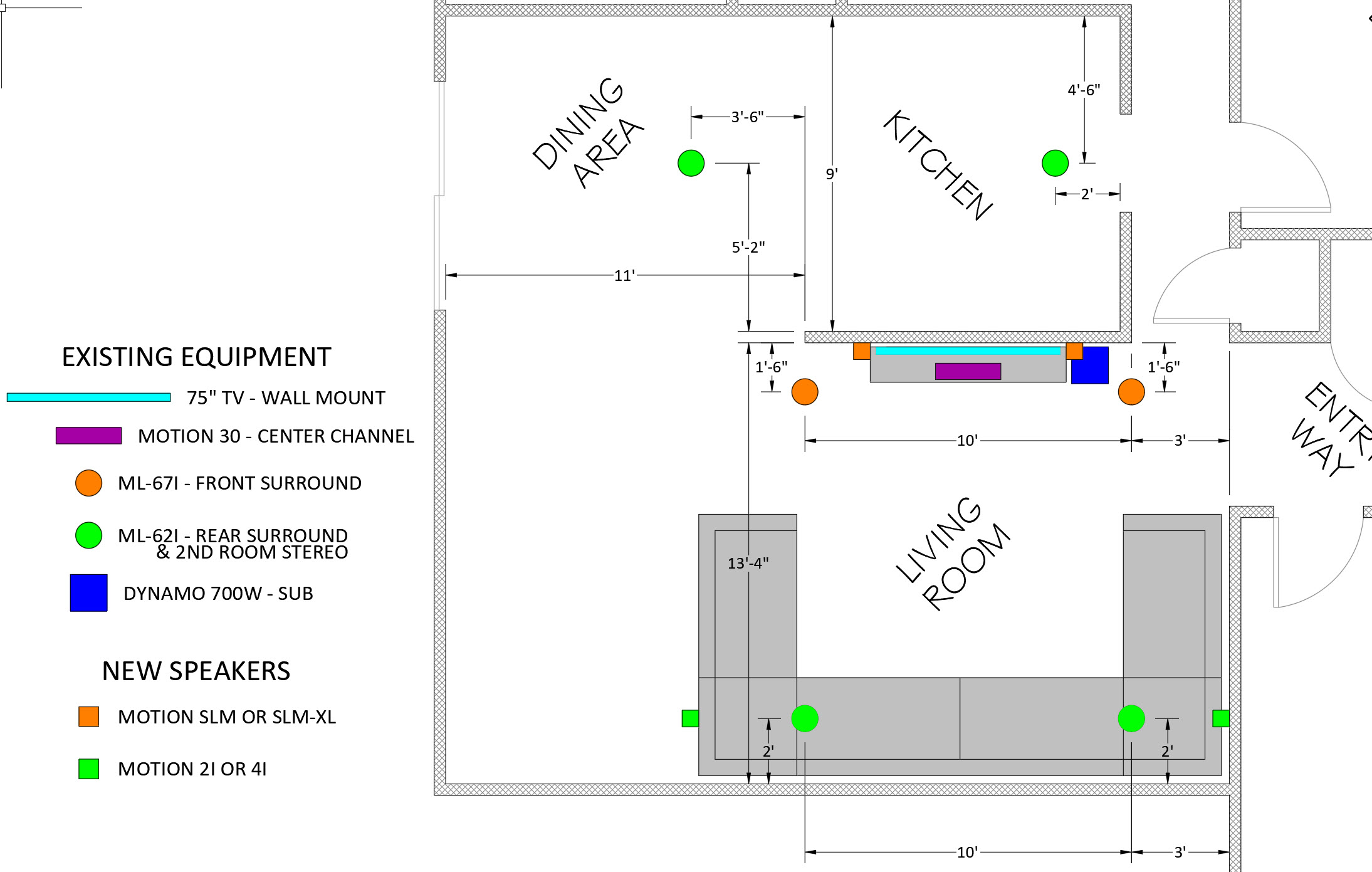 When I started with surround speakers I chose the 4 (before they became the 4i). They worked well enough that when I upgraded from 5.1 to 7.1 I bought two more, 4i this time. I happily used these for several years in my multi-purpose great room - Living/Dining/Kitchen. I still use them, but now they're on the ceiling. My cathedral ceiling is the roof so I'm not cutting into it to put recessed speakers as that space is only 7-1/2" thick.

I would stick with the 4i. They go down to 73Hz but they don't really do very well down to their rated spec, so I would set the crossover no lower than about 100Hz. I have subs in front and rear so I choose to use 130Hz for the XO since the bass is all around. I found the transition was smoother with a higher crossover setting, but 100Hz worked well also. Lower crossover settings just started causing issues, at least in my room.

The SLM-XL should match the 4i very well, they both have 4" woofers, and the SLM-XL is rated down to 100Hz so you might want to try various crossover settings at that and above.

I'm a big fan of these folded tweeters.
You must log in or register to reply here.

Feb 2, 2022
IEnjoyOLED
I
A
Help with new compact ML system